Home / Board of Directors (OLD) / Immediate Past President 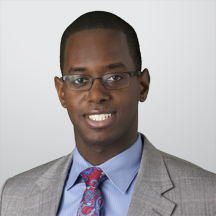 Pedro Gassant is an associate in Holland & Knight’s Miami office and a member of the firm’s Litigation Group. He focuses his practice on land use, zoning, and procurement matters. Mr. Gassant also has significant litigation experience.

As a first-year associate, Mr. Gassant won his first case in Federal Court, in the Middle District of Florida, reuniting a father with his son under the Hague Convention on the International Civil Aspects of Child Abduction. Recently, Mr. Gassant was a member of a litigation team that successfully convinced an administrative law judge to allow the development of a 240 luxury rental unit in Hialeah, Florida.

Mr. Gassant is a native of Miami and received his undergraduate degree from Florida State University. As an undergraduate, he was elected president of the Black Student Union and founded the East Gadsden Initiative, which implemented programs to assist students in preparing for the Florida Comprehensive Assessment Test (FCAT). Mr. Gassant was also selected as the Humanitarian of the Year and was initiated into the Chi Theta Chapter of the Omega Psi Phi Fraternity, Incorporated. As a senior at FSU, Mr. Gassant was awarded as the Humanitarian of the Year.

Mr. Gassant attended law school at the University of Pennsylvania. While there, he served as an editor of the Journal of International Law and helped develop a program to teach Kenyans their rights under the 2010 Kenyan Constitution.